gallery Dear Adoption, Thanks to You, I Am a Dead Girl Walking 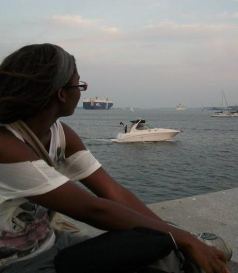 Dead Adoption, Thanks to You, I am a Dead Girl Walking

One of the scariest things about adoption is that many adoptees don’t really know their history. We don’t know where we come from, who we really belong to, or what our futures will look like.

I was adopted back in 1987 by two white supremacists who, on the outside, appeared loving, kind, and gentle. But on the inside, spewed words of hate, racism, and superiority to anything and anyone who was not their hue.

So growing up, I always felt like the “other”. I was that person they hated so much. I was the black sheep of the family. Figuratively and literally.

I constantly heard my adoptive mother say “Black people are this way, black people do that”. I had to “talk proper” or I’d be classified as one of them. I wouldn’t be welcome.

They never directly said “White people are better”, but sometimes in the not saying, way too much is said.

When I was about ten years old, I started to develop faster than my sister. During the time I was living with them, I was told I was the same age as their biological daughter. And up until I was about ten, we were the same height, about the same weight, and the same pudginess. I really had no reason to doubt their claim.

It wasn’t until I was a little over 10 that I started to develop even further. I started asking them “Why, if we are the same age, am I developing at a faster rate than she is?” Today we know that so many factors could have caused this but what my adoptive parents failed to do was care about me and what my papers actually said.

Instead of looking at my birth certificate, they went with their “fantasy”. It was clear on my birth certificate that I was older than she was by about 3 years and no one EVER said a word. Why? Did they want to continue what they started? Did they want to keep pretending that I was white, that I would always weigh the same as she did, that I would always be a “happy baby?”.

Growing up as a black child in a mainly white family was very difficult. I didn’t know I was actually black until I turned about 7 or 8 years old. No one really told me I was “black”. But it gets worse, no one ever told me that I was dead either.

In Haiti, it is very hard to retrieve documents from the archives because back in the 70’s and 80’s, nothing was recorded on computers. Things were done by hand, stored, and forgotten. When my biological mother dropped me off at the orphanage at only a few days old, she left me with a birth certificate (I think). The orphanage was flooded when I was two and all documents were destroyed.

My adoptive parents came into the picture when I was thought to be about three, due to lack of good nutrition and physical care. In reality, I was closer to 5 or 6. My adoptive mother, whom I will call horrible lady, was volunteering at the orphanage us children were transferred to after the destruction of the first orphanage. She saw my “need” (I was in pretty bad shape) and decided she would “save me from the grounds of Haiti’s soil”.

In order to start the adoption process, I needed a Birth Certificate.

“Aha!”, I can hear them saying. “This will do. The age looks about right. Who cares about the ridiculously long name and who cares that the mother on the BC is not her actual mother. We need to make sure she claimed her daughter on her own and that there was no father involved. If she goes to search one day for her real family, she won’t’ be able to really find them.”

So there you have it, a year later, I sat in my adoptive parent’s house with their one biological white child and I became the living dead girl.

There are many issues and questions I have about this unethical adoption:

Fast forward to January 2016… I actually believed that the mother on the BC was my mother. Her last name was Cyr. I had known the “I was a dead girl” part but I had thought that my BC was just altered, meaning the rest of the information on it was true. It was not until I spoke with my biological brother (after finding him on Facebook) that I realized ALL OF IT IS/WAS A LIE and that the woman who supposedly “gave me up”, according to my Birth Certificate, is not even my MOTHER. My biological mother’s last name is LIMA.

There is a feeling of loss that comes with being adopted. In fact, it is not just a feeling; it is a reality. One loses trust, and one learns not to care anymore. But there is even a deeper feeling of despair when you realize that everything you were taught was maybe true is not even a little true.

Adoption created this mess and my adoptive parents are fully responsible. I found out in 2016 that my adoptive father was the one who encouraged the fake papers because there was “no other way to get you out of the country”. To me this translates to “I wanted you right then and I will stop at nothing to make sure you are MY adopted child that I saved.”

Finding out that the little information I had is now NADA makes me want to curl up in a ball, and roll back into the black hole from which I came. I have nothing and no hope sometimes. I can’t answer the positive Whys of my life, such as why I have a beautiful signing voice. And I can’t answer the negative Whys of my life, such as why I feel sick every day. What is in my DNA that makes me ache? I can’t connect to anyone. I can’t reach out. Even though DNA testing gets me closer, it cannot explain the essential parts of me that are missing; my broken and confused heart.

My biological brother recently got upset with me and claimed that I don’t want to really want to meet them. First of all, I’d love to meet them but it is not that simple. I have a family, and I won’t just “leave it all” to visit people I never met before. I won’t and I can’t.

I did get a chance a couple of years ago to meet my biological sister who swears I belong to them. There is a trust factor that comes with people telling you that you are their blood. All my life I have been lied to so what would make this time any different?

My biological Aunt contacted with me in late 2015 and wanted to meet. We met up and the experience was jaw-dropping. I should have been raised with her all along. There were tears, and questions…and peace.

Thankfully, my adoptive parents did make an effort to keep in contact with the lady who supposedly gave me up.  We also sent her pictures of me when I was growing up. They stayed in contact with the orphanage and we returned a couple of times to visit her.  I had no idea who she was. I just knew that after every visit, I returned home with a white lady and not a black lady. Did my biological mother know that the birth certificate they had for me was not mine? Did she even consider me to be hers?

I am this dead person. If I attempt to find my REAL birth certificate, can I become who I really am supposed to be? What’s in a name? Power? Strength? Glory? Can I have peace if I never get my real Birth Certificate back?

I want to meet my fake mother. I want to go back to Haiti and find the person on my Birth Certificate. Maybe I can be her daughter that died. Maybe I can live through her. Does she even know that her daughter died? Was her daughter put up for adoption and then died of mal-nutrition?

Was this all some insane joke?

But I also want my real Birth Certificate. I want pictures of me when I was a baby. I want to see my real mother’s name on a document that belongs to ME, not someone else. Am I living my life to be the person she would have me be?

Ms. Lima is an adoption consultant living in the Boston Area. She first began to wonder about her birth family when she realized that no one in her family looked like her. She was not treated like the rest and she was always expected to be happy, thankful and grateful.

After college she wrote her first book and has recently published her latest book called Rainbows But Not Unicorns, which also comes with a workbook for adoptive parents. Her latest book is a hands on guide of how to make sure the adoptees/foster children are the focus in the family. The book has received great reviews and has proven to be a helpful resource for adoptee, foster children, adoptive parents, and foster parents alike.

Ms. Lima is married and has two children (one teen and one young adult) and a lovely dog.